Information on the list view, the record options, and upload status.

The record list view is an alternate view to the standard map view. 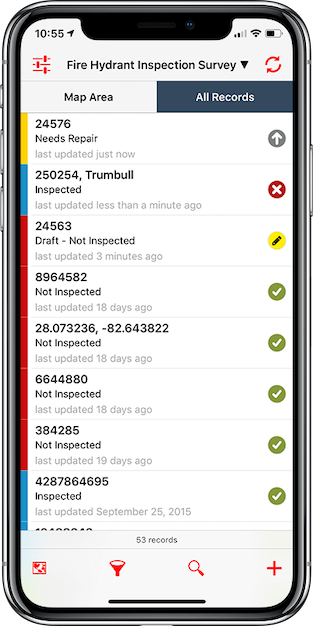 By tapping a record from this list, you can view, modify, or edit existing records. The records list also shows you how many records are displayed on your device and how many records, total, have been collected.

To the right of the records in the list view you can see the upload status of the record. This will give you an indicator of the state the the record is in on your mobile device. There are five states that a record can be in.

Successfully Synced: The record has been synced successfully or there have been no changes made to the record since it was downloaded to the mobile device.

Saved as a Draft: The record has been saved as a draft due to required fields not being filled out.

Not Been Synced: The record has not been synced to the server. Running the sync will attempt to sync these records to the server.

Failed to Sync: An error occurred during the sync process and the records has failed to upload to the server.

Attachments Are Not Synced: If you have changed the attachment sync settings in the app settings any records that currently do not have attachments synced will show this icon.

Swiping left on a record will reveal additional options where you will find two options, More and Delete. 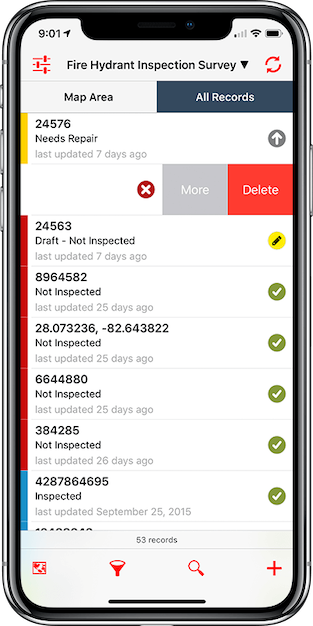 Tapping the delete button will delete the record off of the mobile device.

Duplicate.. - Duplicate a record can assist in quicker data capture when most of the new records being created have the same data as a previously captured record.

Show on Map - Shows where the record is located on the map view. 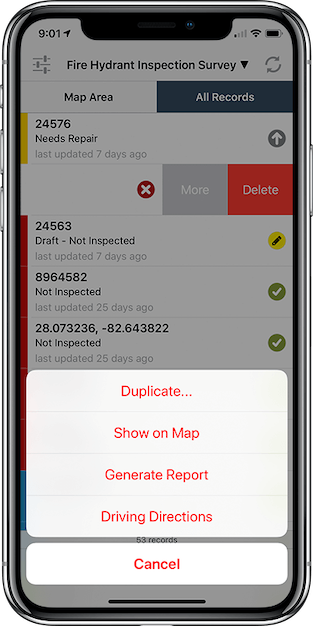