Use Google Sheets to create a Windows .bat or Mac/Linux .sh script to rename your exported Fulcrum photos.

Written by Joe Larson
Updated over a week ago

This is a guide to an alternative, non-programmatic method to renaming exported photos from Fulcrum. It uses freely available tools and should work for users across all operating system platforms. While this guide uses Google Sheets, the process is likely similar for Microsoft Office Excel and LibreOffice Calc.

1. To begin, we will need a CSV export from Fulcrum including photos. Import your CSV into a blank Sheet.

2. If your Fulcrum app contains multiple photos per photo-field, you will need to prepare the Sheet accordingly. If not, please skip this step.

Use Sheets' Split text to columns functionality to create separate columns for each photo ID (both Excel and Calc have similar functionality). You may have to do this more than once, if you have more than one photo-field in your app.

3. Insert columns to the right of your photo-field columns. Give them a name in the first row header; you can use the corresponding columns' name and append the suffix _rename to it, like below.

4. Now we will use a formula that will build a new filename for the photos by referencing a couple other columns in our exported data. This particular formula is specific for a demonstration project, but hopefully it can serve as a model for you to achieve your own similar task.

Below, I have already applied the formula to my first rename-field column and am applying it to my second column (changing Post1 to Post2). I did a quick test on a few rows - looked good, so I pasted it into the rest of the column. I also checked to make sure my custom ID field was inserted when appropriate.

5. This step is where we will build our rename commands. Depending on the operating system of your computer - you will use ren for Windows OR mv for Mac/Linux. I will use mv  in this example. Again, we will use a formula to check for empty values and to build our command.

6. Next we will copy the rename commands into a text editor for cleanup. Copy the cells containing your commands from your column, except the first row header. 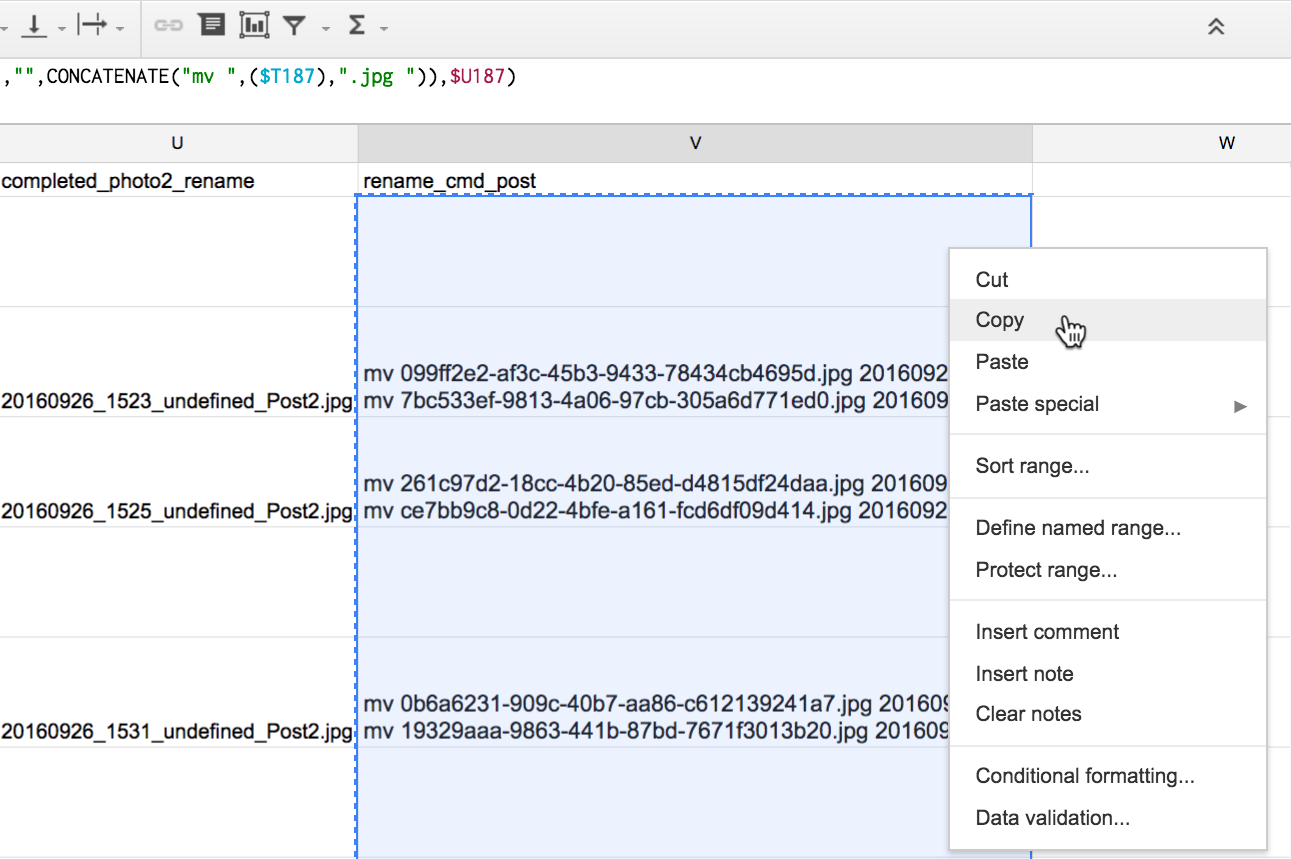 Paste this into a text editor such as Sublime, Atom, or Notepad++ (something that includes Find & Replace with support for RegEx) and save your the file, example: rename-photos.sh (Mac/Linux) or rename-photos.bat (Windows).

7. Let's cleanup your script. We are going to use Find & Replace with RegEx to tidy up each line containing the rename commands. There will be 3 parts:

1. Remove the double-quotes at the beginning of each line by finding ^" and replacing it with nothing.

2. Remove the double-quotes at the end of each line by finding "$ and replacing it with nothing.

In conclusion, this guide has shown you how to work with spreadsheet formulas to modify filenames and build new commands for a script. Find & Replace was also used (with RegEx) to cleanup text. Hopefully this guide provides an example of an alternative method of building a script for batch processing files.

Mac/Linux: To run a script (example: rename-photos.sh ) from a Mac/Linux terminal, open the terminal and navigate to the directory containing the file and type sh rename-photos.sh.